Drifting Down the Darling

Drifting down the Darling can best be described as the incoherent thoughts of a traveller who will use any excuse to put a boat onto the Darling River and then write crazy stories about birds. These stories are often made up and he blames others for ‘not understanding him’ as the reason he exaggerates. Do not listen to anything he says about Australian birds-none of his observations are based on skill, truth, or even reality.

I loved your book, Tony. Sometimes a book finds you, at the right time. I have lived in Adelaide and Melbourne, and not seen the Darling or the vast inland plains before we drove through last week, so meeting you and reading your book gave me a valuable added interest and understanding of place... I understand the need to travel, and think and read in solitude, and our lifestyle on a boat gives me this opportunity in abundance. It must have been a rewarding experience to articulate your story, and I admire you for writing such a personal funny and loving book. I think you have and will touch many a chord in readers...more than you will know. Jody Bedson, sailor

Paddling Down the Darling

Thirty years ago Tony Pritchard drifted down the Darling River in western New South Wales. The book that resulted, 'Drifting Down the Darling', was full of lame jokes, unreliable bird observations and a sort-of detailed quest for one of life's meanings, i.e., a place to belong.

It did not become a best seller.

Now, we have Paddling Down the Darling and except for the one word, nothing has changed. The dodgy jokes are there, the unimportant bird comments are in and the search this time is for something much easier than before. This time Tony goes looking for God.

Come with Tony Pritchard as he stumbles and mumbles his way from Menindee to Wentworth, three times, in a fifteen-foot canoe. Marvel at the way he scatters the wildlife, annoys the locals and how he slides from raw emotion to sublime idiocy, all the while unloading enough personal disclosures to embarrass most of the planet's grandparents.

Canoeing Down the Darling

After the runaway success of Drifting down the Darling and Paddling down the Darling (three and four copies sold respectfully), Tony Pritchard has now thrust upon us Canoeing down the Darling. Nothing has changed except for that one word, and therefore it follows Pritchard’s chosen style, which is a combination of chaos and the occasional wild guess. The lame jokes, however, will be far worse than previously encountered.

Apparently Canoeing down the Darling is based on the true story of eight more trips down the Darling River (one is on the Macintyre, which is the upper Darling, and one is on the Paroo, which does flow into the Darling every now and again), and there are the usual uncanny discussions with wildlife (birds, pigs and turtles) the usual unusual uncanny characters (hairy motor-bike riders and some ghosts), and of course, solutions to all the world’s problems.

The story is reasonably linear in a downstream fashion, charting each of the trips, but there are times when the thought patterns are not remotely linear. Think pinball machine, atoms in a gas, or insects chasing the sunlight. This manic approach is punctuated by periods of slow sentences, effortlessly slipping out of overdrive into first without crunching grammatical gear teeth. A parsing of life’s simpler parts of speech, one could say.

If you are a real kayaker, one who paddles eight thousand miles a day on a single breath, Pritchard’s slow-coach canoe approach to river travel may not excite you. But if you want peace, harmony, and the odd delve into fantasy, then this might be your baby. 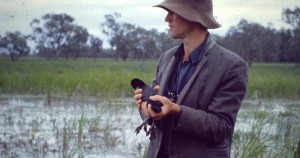 Tony Pritchard was born in Dubbo, New South Wales, in 1952. He has travelled extensively and rates the Darling River as the best place in the world. He currently lives in a shed in Brisbane and is sometimes home to feed the chooks, water the chokoes and to make more lists. His wife loves him.

Although he often denies it, Tony Pritchard was born and raised in West Dubbo. He spent his first twenty years staring at pigeons but is not sure why he did this. He has resisted various attempts to educate him and subsequently cannot count beyond twenty-one. He is also an ungrateful swine who blames his Dubbo upbringing for his personality disorders, the reason he drifted on the Darling River for almost eighteen months and the fact that he tells lies every time he opens his mouth. He is a failed tradie who has caused several hundred roofs in Dubbo to leak, a former footballer who ran onto the field at least twice, and a confused person who keeps searching for things.

In an effort to gain sympathy, he also recalls the difficulties he faced in foreign countries. Things such as being strip-searched in Israel, and a couple of unconventional departures (usually known by Customs as being deported). Throughout the Darling River story we learn about Pritchard’s insecurities, anxieties and other fine character points. He says this river trip made a man out of him, but we’ve heard of those who say he may have his genders mixed up.

After drifting down the Darling, he lived alone for a year next to the Macquarie Marshes, and this is where Pritchard unravelled. He rejects the assumption that he had a mental breakdown. ‘It was a spiritual awakening’, he said. ‘One that gave me great insight into an approach to living that to this day gets me by. I am now more secretive with emotions.’

This book will surely set back memoir writing fifty years.